Remember those “safety” signs the city recently unfurled, Slow Down For Us? It appears the city has released a new phase in this program, Please Stop For Us (I can’t find any reference of this initiative on the city’s site):

All the same critiques apply to this sign as applied to Slow Down For Us. This isn’t really a safety plan; it’s a tacit admission that the city has built ridiculously unsafe infrastructure for our city (this sign was spotted just off Fifth Avenue near Bank Street). Streets with residences, children at play, (relatively) high pedestrian and bike modal shares, and a good deal of density aren’t actually safe for those who are using the streets on a regular basis.

It’s gross that our city leaders eschew actualy safety in favour of these awareness campaigns while continuing to build a thoroughly unsafe city.

You see, just as Slow Down For Us is a tacit admission of failure, Please Stop For Us, is tacit recognition that cars don’t actually the rule the road, and drivers have an obligation not to kill people. When people are driving on our city’s streets, they should stop for other people who are using the street.

To get a better sense of this, it is important to realize the purpose of city streets. Streets are not meant primarily for facilitating transportation; streets are meant to facilitate city life. Especially in dense urban areas, the purpose of the street is to engage the resident. For shopping. For socializing. For recreation. For entertainment. For exercise.

It is more important for the life of the city that people be engaged in the life of our streets rather than speeding through them, 20 – 30 km/h over the speed limit. This is why we need road diets, wider sidewalks, raised crosswalks, bike lanes, reduced speed limits and a host of other city-engaging initiatives.

This is why drivers need to stop for us. 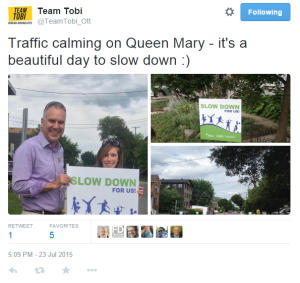 Recently, the city launched a new campaign to help make our streets safer. I’m not sure what you’d call it. It’s not really a safety campaign, and it’s not really an awareness campaign. Truly, it’s just an admission of guilt. The city has built horribly dangerous roads, but are willing to make nothing but the most facile gestures towards fixing them.

The project is called Slow down for us! It appears to consist of putting up lawn signs that read “Slow down for us!” and show kids playing. It’s a worthwhile message: let’s not kill children.

First, the good news; councillors are getting behind this project. Many councillors have been out putting up these signs, distributing them to residents and advertising the initiative. It’s good to see councillors getting on board with safety initiatives (however, any councillor who is willing to hand out these signs, but isn’t willing to do anything to actually curb traffic speed and volumes is a hypocrite).

That’s it. There’s nothing else good about this project. The only reason we resort to asking residents to put up signs exhorting motorists to slow the fuck down and stop running over kids is because we over-build our roads, rely on car-centric neighbourhood design and do next to nothing to stop or punish dangerous drivers.

Above, you see a picture of Rideau-Rockliffe’s councillor Tobi Nussbaum helping launch this initiative. It so happens that I bike through his ward every day. On Queen Mary Street between Quill and Edith there are five Slow Down signs on one side of the street. The other side of the is a park, and there is another sign posted. Between Quill and Vera, there are twelve of these signs.

This isn’t an awareness campaign; it’s desperation. Queen Mary is a residential street. But it’s a wide residential street with, mostly, long sight lines. It is a street designed for speed at the expense of safety. The popularity of these signs on Queen Mary isn’t and indication of a successful safety campaign. It’s an indictment of a city that doesn’t care about safety.

Now, I believe that Nussbaum is a councillor who actually cares about street safety, but not every councillor does…not really. And so I would implore any councillor who has backed the Slow down for us! campaign to also back measures that will make our streets substantively safer.

However, if you value three minutes of commuting time over the safety children, handing out these signs is little more than a lie.