I saw this tweeted out today. It’s makes a good point about the possible callousness of AV companies and proponents. Further, it calls into question what should be allowed on public streets, and what the public should be exposed to without their knowledge or consent: 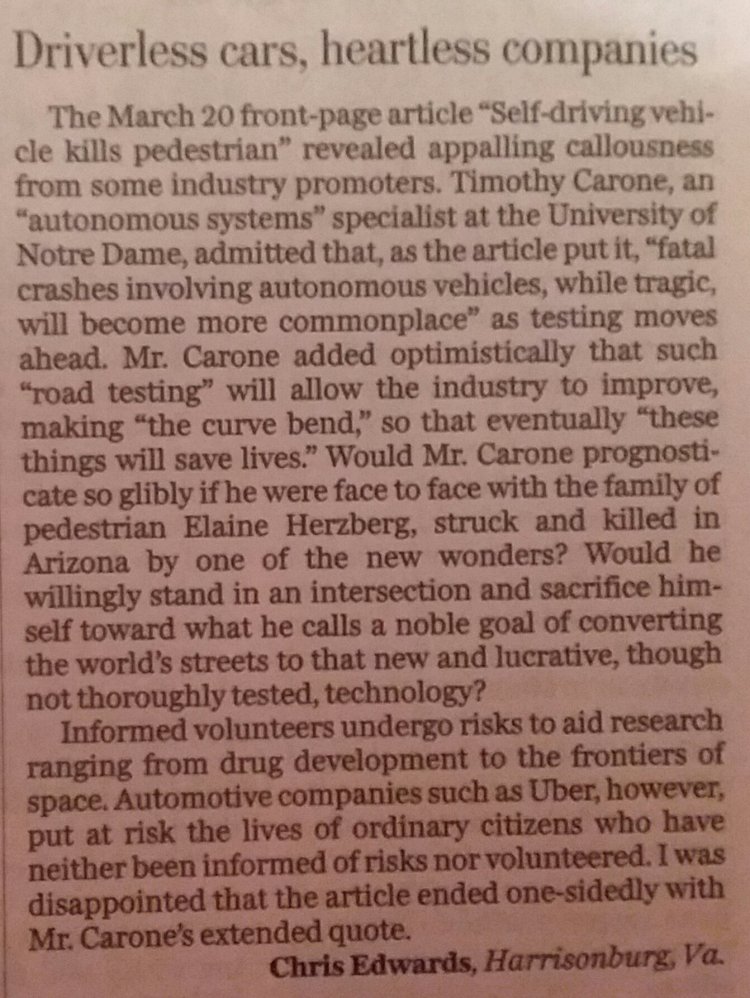 But, y’know, the AV guy isn’t really wrong. Fatalities will become more commonplace with AVs. And the only way to work towards properly-functioning AVs is to test them. So yeah, it’s a gruesome calculus, but if more AV deaths means fewer road deaths, overall, maybe that is a fair trade-off.

Because we have already decided to accept death as a normal part of street life.

Something like 32,000 Americans die on roads every year. About 65,000 Americans died in Vietnam. American roads basically have their own Vietnam every two years, forever. Arizona, where the recent high-profile AV killing happened, has a pedestrian death once every 1.6 days.

Now, I’m inclined to believe that Chris Edwards of Harrisonburg, Virginia, doesn’t want anyone dying on the road. I don’t think anybody wants that. But it’s absolutely clear that many, many people are okay with it.

I’m not going to assume that AVs are the solution to all the death on our streets. Further, I’m pretty sure that they’re going to be a bit of a scourge if we let them run amok (like we’ve done with normal cars for the last half century). But there is a lot of potential for AVs to help make our streets safer.

But the real problem in all of this is just how dangerous our streets are, inherently. The solution to all this death isn’t better driving technology, it’s safer streets. It’s recognizing that errors (automated or man-made) are going to happen, and then doing what we can to minimize the damage they’ll cause.

It’s about embracing the principles of Vision Zero. It’s about using infrastructure to provide safety for road users and allow for margins of error for drivers.

Until we do that, a helluva lot more people are going to die.