Gloucester-Southgate Councillor Diane Deans made a bit of news last week when she proposed the creation of a Women’s Bureau.

Here’s what Deans is suggesting:

Deans’s plan includes appointing a member of council to serve as a special liaison on women’s issues, as well as pushing for more gender parity on boards and commissions. She also wants to bring a group of city employees together to consider women’s issues before local decisions are made.

Deans’s idea to create what she calls a “women’s bureau” would “put a gender lens on all that we do at the city,” Deans said. That could include everything from hiring and human resources to communications, budgeting and zoning.

“That’s what I imagine that we need to do to really bring this city into the next century when it comes to gender equality issues,” she said.

Currently, city staff and city council are dominated by men, to a ridiculous degree, thus, city planning tends to take on a very male perspective. A whole lot of implicit biases are built into our city, our infrastructure and our service delivery. Deans suggestion would help us identify, acknowledge and address these biases. It would lead to city building that is more responsive to the needs of all residents.

Basically, we’d take off our men-focused glasses and actually consider the experiences of everyone.

(By the way, acknowledging these biases isn’t to label every male politician, planner and, well, pundit a raging misogynist. It’s an acceptance that life is complicated, and we need to hear other perspectives–underrepresented perspectives.)

The mayor, in all his masculine brilliance, disagrees:

He added that if he is re-elected in the fall, he’d like to make sure all city advisory boards and commissions are gender balanced. “We can’t control who gets elected, obviously, but we can control who gets appointed,” he said.

Watson doesn’t feel there are many impediments to women running in the next election, he said, because so many women put their names forward in the last election.

(I’m not sure how we could put dollars into resolving issues of gender equality without first identifying those issues, but I’m sure he knows better.)

(And I’m sure he‘s right that there are no impediments to women running for and winning council seats, and that the consistent and massive under-representation of women is just, y’know, one of those things.)

Writing in the Citizen, Amy Kishek and Erin Gee–who host the Bad and Bitchy Podcast–lay out a compelling case for Deans’s proposal. You should read the whole thing, but here’s a good snippet:

Addressing gender equity and inclusion in policymaking is not straightforward, but it is necessary. Taking on the task means applying a gender and equity lens to all areas of the city’s work. There are women who are differently abled, who live in rural communities, who are old, who are newly immigrated, who are poor, who are racialized, and who don’t speak English or French. There is no singular women’s issue, and no one place to direct funds for gender equity initiatives.

(By the way, Erin and I do the 10 O’clock Talk panel on W1310 every Friday moring; you should totes listen.)

Rideau-Goulbourn Councillor Scott Moffatt decided to pick a nit (which, to be fair, is one of my favourite pass-times). When the Citzen tweeted out this column, Moffatt’s first and only direct response was: 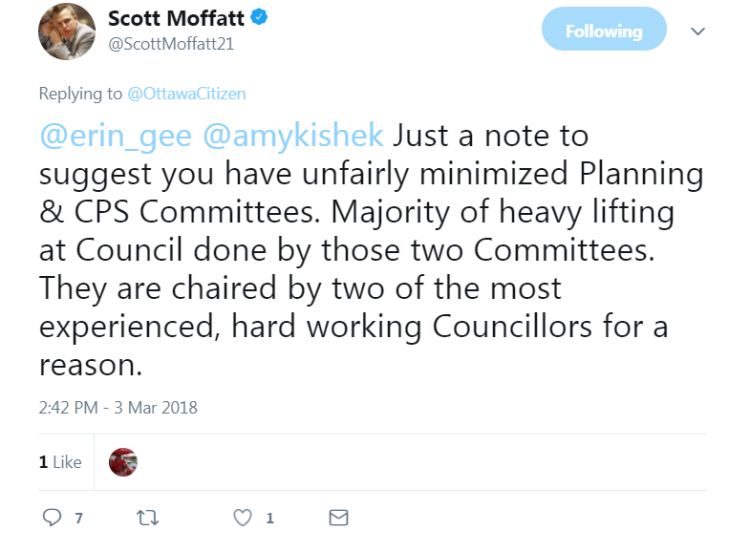 (Later, when it’s presented to Moffatt that 17 of the 20 highest-paid city staff are men, his rebuttal (after a bit of digging) is that 83 of the top 500 are women. So, I really don’t know what his point is.)

Okay, so you can totally have a debate about whether or not these committees are “softer”. It’d be a fairly academic discussion and you’d probably need to really get into the weeds and clearly define your terms and all that fun Debate Club stuff. I mean, sure, many of us like that stuff, and there are often proper times and places for such discussions.

(Full disclosure, I wouldn’t categorize Planning as “softer”, and I sent a lighthearted message to one of the authors about it, because I consider her a friend…or, at least, a Twitter friend. I do not, however, feel any such nitpicking illuminates the public discussion.)

But as a civic leader, taking a well-argued piece on an important city matter, and deciding to engage it only on a semantic level–on only one of the authors’ arguments–is to dismiss this important issue.

And it’s totally a guy thing to do. It takes a ton of privilege to reduce a discussion about treating all residents equally and equitably, regardless of gender, into a semantic debate.

I dare say, if you were to use the aforementioned “gender lens” when reading the piece and engaging the authors, you’d treat the matter a whole lot differently.

So, I guess, we should thank Moffatt for proving Deans’s point?

One thought on “Diane Deans is right. Ottawa should have a Women’s Bureau.”