CBC’s Andrew Foote stirred things up a bit today when he tweeted out these pictures of the Ottawa Business Journal magazine detailing a new festival supposedly being launched by Les Gagne: 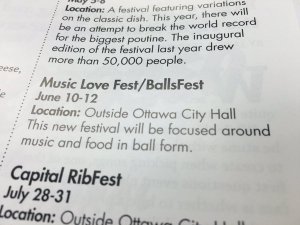 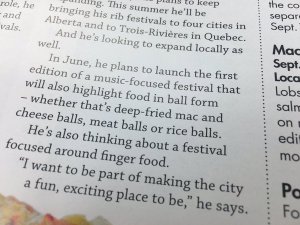 As you can imagine, this didn’t go over that well. People got a little a testy. Les Gagne is the former Executive Director of the Sparks Street BIA before getting sacked in November 2014, and this seems about as nuts as so many of his other plans. Clearly, food festivals are his bag.

Haha. See what I did there?

Since leaving the BIA, Gagne seems to be running a variety of food festivals, like Capital RibFest and Ottawa Poutine Fest (not to be confused with Ottawa RibFest and Poutine Fest, which are both run by Sparks Street), as well as a rather odd twitter account.

(During Gagne’s reign at Sparks Street, there was some odd twitter activity, too.)

As many have suggested, this might just be a joke…but it’d be a really elaborate prank. Balls Fest has been tweeting since October, and Gagne is currently running other (seemingly) successful food festivals in the city, so it’d be weird to hitch his reputation (such as it is) to a juvenile joke about genitals.

I searched the OBJ website, and there’s trace of Balls Fest. A search of the web brought up nothing except for the twitter account, a one-page web page and the rest of us making fun of the thing on twitter. So that’s good news. It shouldn’t need to be said, but the city doesn’t need to be hosting a festival that seems like nothing more than a way to make a bad testicle joke (stolen from Saturday Night Live).