Last Wednesday, I took my daughters to do some Christmas shopping. I bussed down to the Rideau Centre, and then decided to walk home (I had some stops to make along Bank Street, and it’s not going to kill them to walk).

It was almost 4:00 and I walked down Bank Street from Slater to the Shopper’s Drug Mart just south of Glebe before a #7 bus caught up (actually, it didn’t…it was at Glebe as I was walking into the drug store). I was at about Gloucester when I was passed by a #1 and I got to the drug store without seeing another #1 (one may have passed while I was in the store, who knows?).

Think what it’s like on the weekend or in the evening. Last winter, I would regular walk down Bank Street with my then three-year-old from Sparks Street to Fifth Avenue without a #1 or #7 passing me. It could be -30 degrees, and it’d be faster to walk 45 minutes down Bank Street than wait for a fucking bus.

This is why OC Transpo is shedding riders like a…well, I can’t think of a polite analogy.

Of course, mention this to a city councillors who also chairs the transit committee (from his ward in Cumberland), and you’ll basically be called a liar: 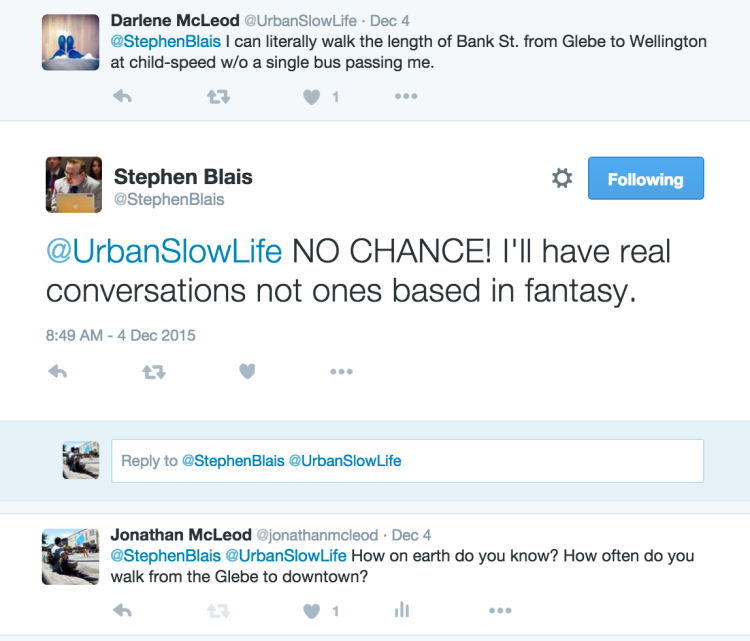 (It’s funny–in a horribly not-funny kind of way–but if you were to check out his timeline just after this post, he has a nuanced discussion with a male interloper after yelling at a Darlene.)

So, no Mr. Blais, there is a fucking chance. I just lived it last week during rush hour. Your on the transit committee and you don’t know what you’re talking about. Worse, you’re effectively calling residents liars when they tell you about their actual experience with OC Transpo.

I want Ottawa to have a great, thriving transit system. The people in charge show no such inclination.

One thought on “This is why people won’t take the bus, Mr. Blais”