There’s one thing I really don’t get. There are people, prominent people, who want to promote the city, who claim to love the city, but can never give up an opportunity to put the city down. If you think Ottawa sucks, why on earth are you in the business of promoting it? 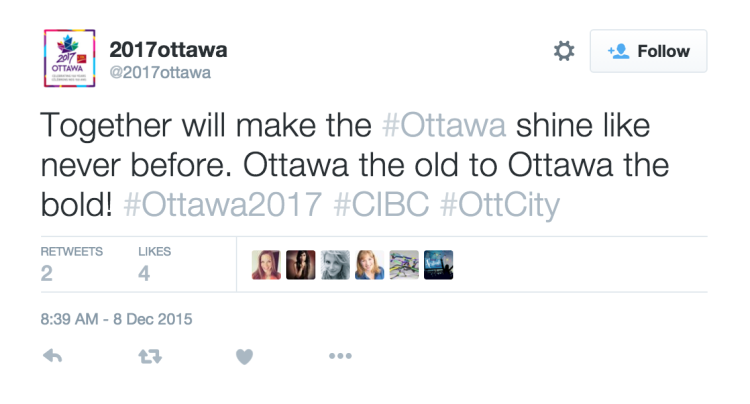 First of all, this is really dumb. The 2017 celebrations have no whiff of being bold. There’ll be concerts and special events, probably some fireworks and a lot of corporate branding. This confederation is brought to you by CIBC! is kind of dumb, not bold (and no offence to CIBC; I’d say the same thing for just about any corporate sponsor).

And it’s not like Ottawa is lacking for “event” happenings. We have Bluesfest, CityFolk, RibFest, RedBlacks, Fury, Champions, Wine & Food, Comicon, Lumiere Festival, GlowFair…and the list really goes on and on.

If you want to be bold, start building a better city. Let’s do some real place-making. Let’s rejuvenate Sparks Street. Let’s create more pedestrian-friendly areas. Let’s build communities. There’s much we can do.

But that’s not really the point of this post. The point is that Ottawa 2017 had no business insulting the city and its residents.