I’ve got nothing really to say about that. It just seems like a lot for the mall.

Ottawa’s taxi disputes are ramping up. The cabbies’ union, Unifor, are fighting battles on multiple fronts, while trying to maintain cohesion between multiple factions within the taxi union. Cabbies are “taking” fares* from each other. Some drivers are calling others scabs. And drivers are attacking each other. During all this infighting, the union still has a labour dispute with Coventry Connections (or is the airport authority? or the city? or the mayor? The messaging isn’t particularly coherent), and they’re still going after Uber.

This week, though, they’ve stepped things up. Unifor honcho Jerry Dias led a demonstration against Uber downtown yesterday. He seems displeased with Mayor Watson’s actions on the matter, and threatens that cabbies will “take back City Hall” if they don’t get what they want. It’s the petulant whining of a rent-seeking cartel when faced with the fact that their favoured status can’t continue forever. It’s also absolutely ridiculous.

Jim Watson has been many things during his most recent tenure as mayor, but hostile to the taxi cartel, he is not. He has repeatedly defended their privileged status and lashed out against Uber. It is only when some of the cabbies have revealed their true nature through repeated acts of violence and unreasonable demands of the city that the shine has come off the official relationship between Watson and the taxi drivers.

Further, this and last council has been especially protective of the taxi status quo. Current deputy mayor found himself in a bit of controversy a few years ago. As The Citizen‘s Joanne Chianello wrote:

At the time, council fought to make those plates non-tradeable, arguing that it was the first, albeit minuscule, step to one day phasing out those tradeable plates. The city would steadily, if slowly, issue new, non-tradable plates over the years and eventually the tradeable plates would lose their value.

Except that in 2012, Coun. Mark Taylor — with the full support of Watson, but not of veteran councillors — moved to make these newer plates tradeable. It’s worth noting that the city’s taxi union gave Taylor a $750 campaign donation after he became chair of the committee that presides over the city’s taxi bylaw. (Taylor has called taking the donation “a rookie mistake” during this campaign season.)

Now, there’s nothing to say that Taylor was on the take. I fully believe that he wasn’t. This seems a situation of people who are inclined to collaborate collaborating. But even if money doesn’t buy council, it does buy access; it is a manifestation of power and power coalesces. A politician doesn’t have to be dirty to be corrupted, and money has a tendency to corrupt.

So if the union is looking for a taxi cartel-friendly council, there’s no reason to think they don’t already have it. At least for now.

One of the mayor’s faults is his inability to take criticism (it’s a fault that most of us share, to one degree or another). A critique of a city initiative is taken as an attack on the city and council and him. The reaction is (to borrow a word from the opening paragraphs) petulant.

But you know what, it’s time for this flaw to finally do some good for the city. Mayor Watson, the taxi union is calling you out. They’re lying about you. They’re threatening you. You would not suffer such an offensive from anyone else; it’s time to stick up for the city and end the power of the taxi cartel.

Council has a taxi review going on. It’ll be useful to hear the results and determine how to transition out of the current messed up system, but, Mr. Mayor, here’s what needs to happen:

(We shouldn’t expand the Airport Parkway, either, but that’s a different discussion.)

Mr. Watson, this is your challenge. You need drag us into a modern and thoughtful transit system. Unifor threw down the glove. Make them regret it.

*The use of the terms “fares” instead of customers is pretty revealing, no?

Remember those “safety” signs the city recently unfurled, Slow Down For Us? It appears the city has released a new phase in this program, Please Stop For Us (I can’t find any reference of this initiative on the city’s site): 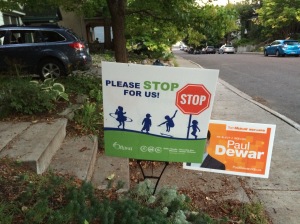 All the same critiques apply to this sign as applied to Slow Down For Us. This isn’t really a safety plan; it’s a tacit admission that the city has built ridiculously unsafe infrastructure for our city (this sign was spotted just off Fifth Avenue near Bank Street). Streets with residences, children at play, (relatively) high pedestrian and bike modal shares, and a good deal of density aren’t actually safe for those who are using the streets on a regular basis.

It’s gross that our city leaders eschew actualy safety in favour of these awareness campaigns while continuing to build a thoroughly unsafe city.

You see, just as Slow Down For Us is a tacit admission of failure, Please Stop For Us, is tacit recognition that cars don’t actually the rule the road, and drivers have an obligation not to kill people. When people are driving on our city’s streets, they should stop for other people who are using the street.

To get a better sense of this, it is important to realize the purpose of city streets. Streets are not meant primarily for facilitating transportation; streets are meant to facilitate city life. Especially in dense urban areas, the purpose of the street is to engage the resident. For shopping. For socializing. For recreation. For entertainment. For exercise.

It is more important for the life of the city that people be engaged in the life of our streets rather than speeding through them, 20 – 30 km/h over the speed limit. This is why we need road diets, wider sidewalks, raised crosswalks, bike lanes, reduced speed limits and a host of other city-engaging initiatives.

This is why drivers need to stop for us.

Jim Watson’s selling point was always competence. We voted him in for his managerial prowess, and we rewarded him with another four years after he’d cleared that not-so-lofty height. He was never the visionary; he was the steward, taking care of the city as it went through some major changes.

And, make no mistake, we’re seeing major changes throughout Watson’s tenure. The rejuvenation of Lansdowne and the building of the LRT are two of the most significant projects the city has seen in the last few decades, and it has been Watson’s job to see the come to fruition. Neither was his idea. He never offered this grand vision of a transformed city. Both projects were conceived before 2010, but it was his competence that has seen them succeed (to whatever degree we consider them succeeding).

This is why the $41M deficit that Ottawa is on the way to incurring during 2015 is such a blow to the mayor’s reign. This is competence. This isn’t the trusty steward. This is a fiscal and managerial screw up.

Prior to Watson’s term, we had the lovable/embarrassing Larry O’Brien. We had fiscal mismanagement (zero meant zero until zero meant a huge tax hike) and a splintered council. Watson has kept tax increases in line and built consensus and congeniality at council (though that’s starting to crack). He kept the city running, and kept service levels reasonably reasonable.

But thanks to the convoluted method of municipal tax gathering, Watson’s small 2% hikes are actually tax cuts. Tax rates aren’t staying in line with property values (which are trending up), and the 2% increase in tax revenue (which is actually a pretty slim increase to the rate of taxation…again, municipal tax policy is a mess) is lower than inflation, meaning the increased revenue isn’t enough to keep up with increased costs. Throw in a lot of snow clearing and some water pipe issues, and the budget has been shot to hell.

And, this is all with ever-so-slightly under-performing service levels. Yes, I just called them reasonably reasonable (and the mayor tends to be quick with a some-people-are-never-satisfied quip when a resident complains), but that’s because we generally meet the core needs, occasionally fall short, often cut corners, but never let things get too bad. The city is running just well enough to stave off all complaints.

Until it’s not, and that’s where we’re at now. The mayor decided to lowball our tax rate, coming in at a 2% increase rather than the 2.5% increase spoken of during the election campaign. It’s great to under-promise and over-deliver; it’s not so great to undercut your capacity to deliver. That .5% would be a great help right now. An extra .5% over the last five years and we’d likely be golden, still praising Watson’s capabilities.

Now, we’re talking about wringing out more dollars from parks and recreation (ignoring the fact that we have too few parks and rec services). Apparently, we have ample excess capacity that we begin renting out to bring in some money. If that doesn’t work, we can probably just cut some programs or shutter some facilities to save on maintenance costs.

Don’t worry, we’ll keep building the Hospital Link, more road-planning folly that’ll just put back any meaningful change for another five or ten years (or more). We’re still going to widen and extend more roads (and still pay for all the maintenance that goes with it).

Currently, the city can’t properly maintain its sidewalks or bike routes during winter. It can’t keep beaches staffed or pools open during heat waves. We have a rotting Science and Technology museum (well, I guess growing mould is a science experiment!). We are abandoning communities like Albion-Heatherington, barely willing to even study how to make our vulnerable communities safer and more vibrant.

But Jim Watson promised a 2.5% tax increase, and by golly he gave us a 2% tax increase. Why should we care that built up a massive $41M deficit.

There’s no pleasing some people, I guess.