There’s a problem at Local, a pub in the re-invigorated Lansdowne. It seems someone got hold of their sign, some chalk and retrograde opinions on the proper role of women. This evening, Catherine Fortin LeFaivre (who ran in Rideau-Vanier last fall) tweeted the question: Is this Oottawa sign at a Lansdowne eatery harmless & lame or just #sexist ?

With this accompanying photo: 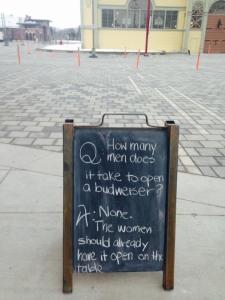 In case if isn’t clear, here’s what some representative of Local decided to announce to our community:

Q: How many men does it take to open a budweiser [sic]?

A: None. The Women should already have it open on the table.

Obviously, Ms. LeFaivre was being a tad rhetorical. Local’s message is dripping with sexism, and it’s on display in a prominent, open public space. You can see part of the Aberdeen Pavillion in the background. Lansdowne is supposed to be a place for everyone. It’s for men, women, boys and girls. It is beyond inappropriate for Local to not only hold and broadcast such an opinion, but to abuse the public square to demean half the population.

At the time of writing, Local hasn’t responded to the many tweets slagging them. Hopefully, the management will quickly see the problem with tonight’s message, apologize and make amends.

Update: To their credit, Local has apologized, which was tweeted out the exact same time I hit publish:

Just wanted to send out a message to apologize for what was posted outside the pub today. What was written was not funny or tasteful.